Breaking The Pattern Of The Machines

I like to work with existing situations in companies and organizations, in the economy as well as in the sciences, and try to find out what possibilities for freedoms and awareness I can create through a change of perception or through a conversion or re-interpretation of processes and techniques.

Ruediger John
Link
Smart systems increasingly determine the procedures of the world – and thus the range of human action. One of the goals of artistic interventions is to break up these structures and to sensitize perception. This is what the artist Ruediger John does with the magazine "auf" of the Zeppelin University, Friedrichshafen.

ISO, DIN, zero-error principle, nanotechnologies; all key words of our time which are delimited by a higher order term: perfection. In today's highly industrialized, high-tech and by now autonomously operating "smart world," efforts are made to largly eliminate the evolutionary and deeply rooted "trial and error" principle by means of algorithms and sophisticated mechanisms. Electronic systems in vehicles, intuitively controlled computer interfaces, but also manufacturing plants in industrial operations strive for efficiency and thus increasingly shrink the human field of action. Where manual manufacturing methods used to provide individuality and boundaries, current algorithm-supported production processes take over the important skills in industry and at home or provide them with support, as is the case in hot type or graphics.

Quicker and "cleaner" processes, as well as a high level of quality, standardization and accompanying interchangeability, are the result. A well-known example is the ISO quality management standard ISO:9001. That the targeted failure of such quality mechanisms also represents an interesting approach, is, for instance, revealed in the production of the new issue of "auf" magazine. 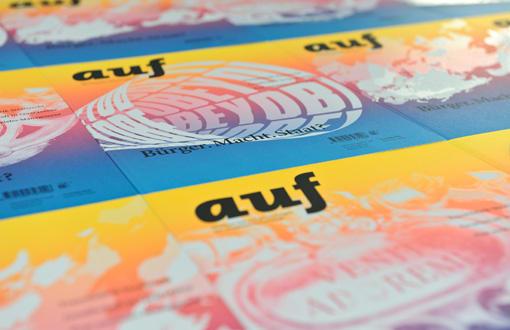 The current issue, #03, of "auf" magazine on the topic "Citizens.Power.State?".
More about auf magazine

Because, in addition to efficiency and quality, today's level of mechanization can also lead to "serialization and instructions to the point of where it becomes a limitation or obstruction," according to the artist Ruediger John: "You can clearly recognize how certain technical possibilities determine forms of expression and perceptions in everyday life." Walter Benjamin already wrote in 1935 within the context of the new mass phenomenon of photography, that, along with the whole mode of existence of the human collective, the manner of their sensory perception also changes over long periods of history. Although he was originally referring to the reception of art, Benjamin's thoughts can be transferred analogously today to the effects of electronic systems on our everyday life.
Despite individualization tendencies in the course of "mass customization" processes, a certain degree of packaging and standardization is maintained.

This is precisely Ruediger John's point of approach: within in the framework of artistic interventions, he influences existing processes and routines, attempting to create a "contextual displacement and thus a change in perception. These interventions can also be assigned to the field of organizational aesthetics, which deals with, for instance, achieving new perspectives on the level of entire organizations, certain subgroups or even individual persons."

Ruediger John now carries out one of these interventions within the framework of "auf" magazine. Ruediger John created the artistic concept of the magazine and served as the creative director of the first three issues. An important conceptual element in the process is that the artistic contribution "does not just meander through the publication, but rather creates sometimes narrower, sometimes wider associations with the texts and topics."

The current edition, #03, on political and social movements bears the title "Citizens. Power. State?". In addition to the interventionist overall concept of the magazine, the production process was fractured in this case in such a way that even the design of the print products corresponded to the topic in its dynamics and singularity: each issue became a unique copy. A manual intervention constituted an important component here in abolishing the uniformity of the machine – and thus increasing the spectrum for personal action: "By very specifically opening and manipulating the printing machine and thus outwitting the computer controlled system, we had more possibilities than before to generate something new." This also opened up space for random developments so that, in this case, even experienced printing experts could learn something new. 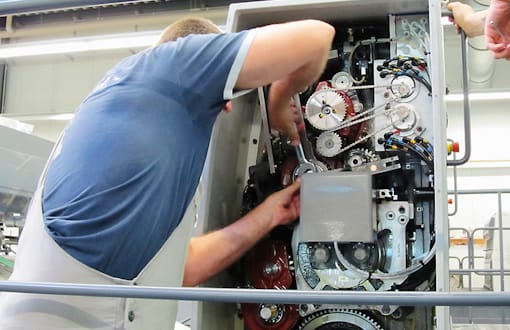 The printing machine is manually outfoxed.

Maximize an artist's degree of freedom

The degree of freedom in the artistic work in "auf" is consciously maximized as art is "not a linear definition, not a playing field boundary;" rather a permanent connection should be created, according to communication designer Philipp N. Hertel, art director and project coordinator for the magazine. An important criterion of artistic interventions is fulfilled with the free space: that companies engage in art and actually abandon the planned path. If artists intervene in processes, they can create inefficiencies and dissonances with the familiar and thus attempt to use these dynamics as motivation and to achieve awareness. Ruediger John: "Here I can effectively intervene in a critical-aesthetic manner and allow exciting results to be created."

Quality for the wastepaper basket

This principle is reflected even in the specific magazine production in the manual interventions into the regulating automatisms of the production machines. When describing the roughly 20-hour long iterative printing process, Volker Eyrich, project consultant at Bodensee Medienzentrum, states that "the first batches thus wound up in the trash, since the color tones weren't yet perfect." The "rainbow printing," a process for soft color gradients, was changed to such a degree that, for instance, the color spectrometers and levigating devices of the printing machines produced the desired differences through manual guidance. The desired product was thus developed successively by playing with the machine. On the one hand, a "struggle," as Eyrich describes it. On the other hand, the desired rupture of routinized actions and the virgin soil that Ruediger John wants to activate and produce in his works. Together with the varying "color tendencies" that this created and in conjunction with three different cover versions, the "section-like and thus incomplete" view that a single, individual magazine is capable of providing should become clear to the reader. It becomes a magazine model accustomed to intervention. 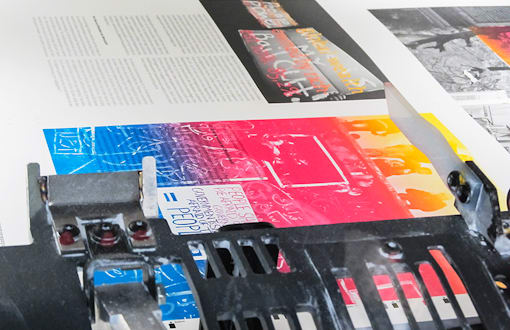 A section of the completed sheet after printing.

Interventions as a necessary development?

Ruediger John is certain that artistic interventions will increase in relevance. In the wider economic context, i.e., beyond individual artists, established structures already indicate this in, for instance, Sweden, Spain and France. These countries have so-called intermediaries: organizations that bring together artists and companies and oversee the interventions administratively.

More on the intermediary landscape in a study by Berthoin Antal et al. (2011)

The revision of certain behavioral patters, for example through dissonance with the familiar and through irritation, is also pursued there. As "auf" also attempts conceptually. Ruediger John formulates it as follows: "The magazine remains an experiment and a work in progress; it does not have to be immediately clear to everyone nor please everyone; it must, however, motivate or – even better in my opinion – make people uneasy."